You are a tiny wizard, as small as a drawing on a business card. You do magic in the form of single-word spells taken from a dictionary.

At a tiny scale, even a house offers ample opportunity for adventure. On your adventures will you encounter big bugs, tiny dragons, ancient room guardians, or something only you can imagine?

Made for the Pleasure-Not-Business Card RPG Jam.

This game can also be played with a copy of the rules, any business card (for flinging), and an index card (for your drawing, spells, and reason for becoming a wizard).

Get a physical version of Tiniest Wizard as well as 49 other card sized games by backing the Tiny Library Kickstarter!

I love this concept! Turning Dictionary pages into your spell list is genius and could lead to some really creative spellcasting moments.  Also slowly converting objects from your surroundings into a fictional landscape is a really good worldbuilding method. I might this out to generate a small portion of a World I am making, adding a Wizard in its history.

I'm so glad you like it! Thanks for commenting!

My cat licked the wizard paper does that mean I tamed a draco-feline beast (yeah).

Absolutely perfect! Pet interaction is the pinnacle of Tiniest Wizard play in my opinion. Thank you for telling me about your game!

I realized that I posted a comment on the Tiny Library Kickstarter page, but didn't put it here!

I'm a children's librarian at a public library and I run gaming programs for kids and families. Earlier this week, we ran Tiniest Wizard for our Adventurers' Club (RPGs for kids) and had so much fun!

We all met up in one room where we created our characters and spells, then briefly went over some game and safety guidelines. Then, we went into another room where my co-GMs and I had setup a bit of terrain for inspiration (table for a mountain, a blowing fan, a cauldron bowl, a Halloween skull, some stuffed animals, a plasma ball, Jenga, some giant teeth, etc.). We didn't have a linear adventure planned out, but we did brainstorm a few significant things that could happen for each terrain area. We wanted things loose because we didn't know where they'd want to go, etc.

Anyway, the adventuring party (known as The Aqua Jokers of the Crusade of the Dagger) ended up discovering that an evil robot had turned a wizard into a pair of giant teeth and the party had to find the evil robot and return the wizard to his true self. They ended up visiting an enchanted forest where a unicorn gave them magic dust; they discovered moveable blocks and built a statue in honor of forest creatures - some magical light creatures where so impressed that they granted the party a single time use spell that would call first creatures to their aid; they encountered a baby dragon and made it fall from the sky, which provoked the guardian dragon who breathe fire on them, but someone used a "jewel" spell to create treasure as an apology, then they traded a bit of magic dust for a dragon tail scale; then they encountered a giant bottomless cauldron (someone jumped in, but the party rescued them) where they used magic dust and dragon tail scales to make a potion that would blast something into space; then they encountered a giant skull that asked them a riddle which led then to a space frog who knew where the evil robot lives so he gave them a ride to the portal; they activated the portal and the evil robot, who also farts, emerged from the portal.

The evil robot liked turning tiny wizards into single body parts (like giant teeth). The evil robot then turned one of the party members into a fluffy tail (this wizard had a tail). The party summoned the forest creatures who told the robot they would chew through its wires but the evil robot didn't want this to happen so it negotiated with the party. The robot missed dancing and really wanted a disco ball and said it would exchange three requests for a disco ball. The party combined a "silver" spell with a "flash" spell to create a disco ball and in return they asked for the two tiny wizards to be returned to their regular forms. As the third request, they asked the robot to stop being evil.

They found the teeth wizard, who has a big shiny smile, and discovered that the wizard liked to tell jokes so we ended with a disco party and knock knock jokes and a giant banana. There was a lot of laughter and everyone had so much fun.

This rules and I'm so happy you came here to tell me about it! 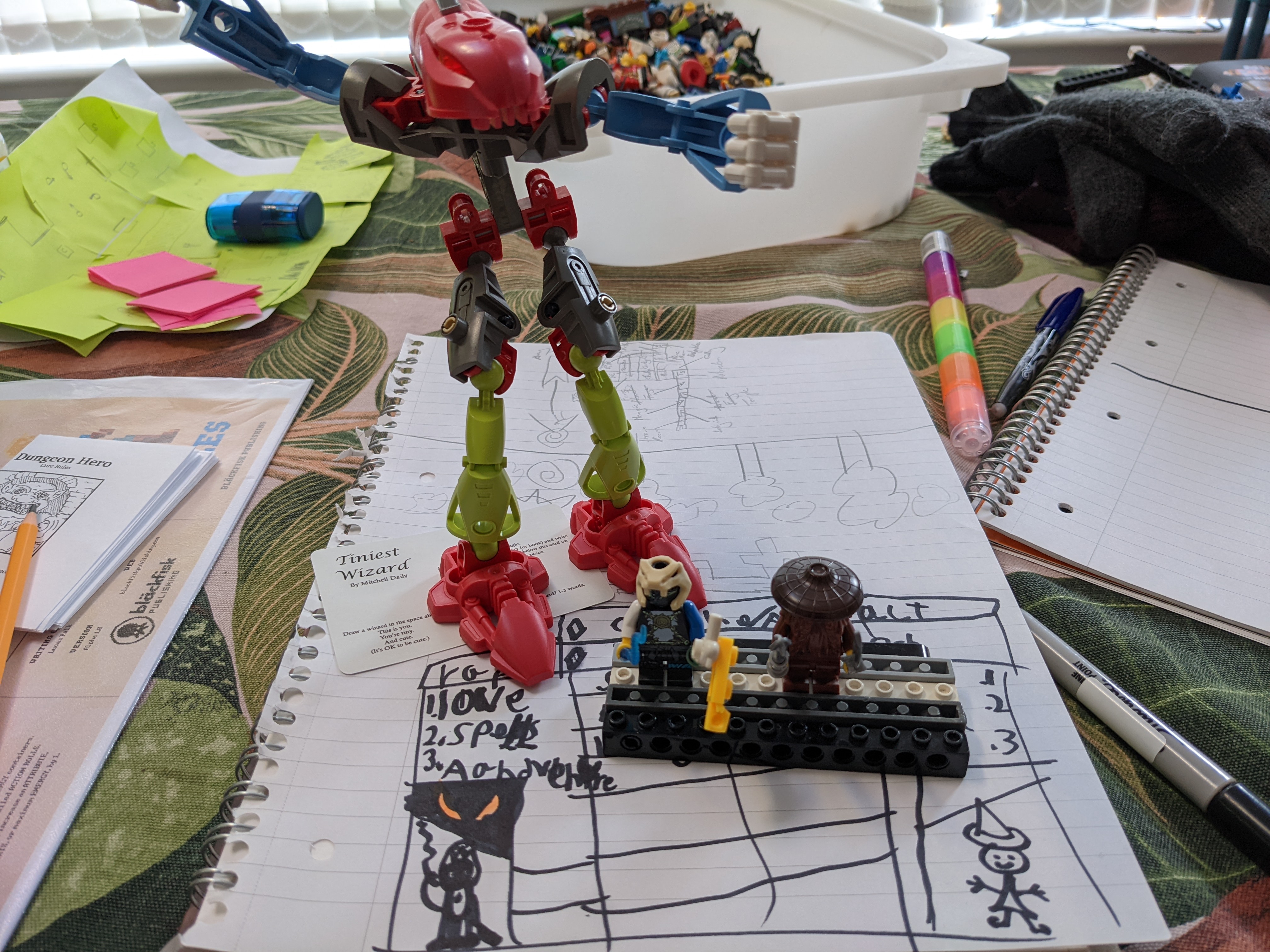 This is a lovely wee game - I played it with my son this afternoon, using his Lego minifigs as miniatures. We used spells to get through closed doors and had a couple of run-ins with the family dog...

Tiny Wizards are cute, and this is such a cute game! Cute is good!

This was great fun! I love the simplicity of it all, the magic system and the 1-3 word backstory are so so stupid in the best way possible. I modded it a bit by making these little markers and by using a d4 to decide things, and that worked great. Thank you for the hour of entertainment, free-form wholesome fun! 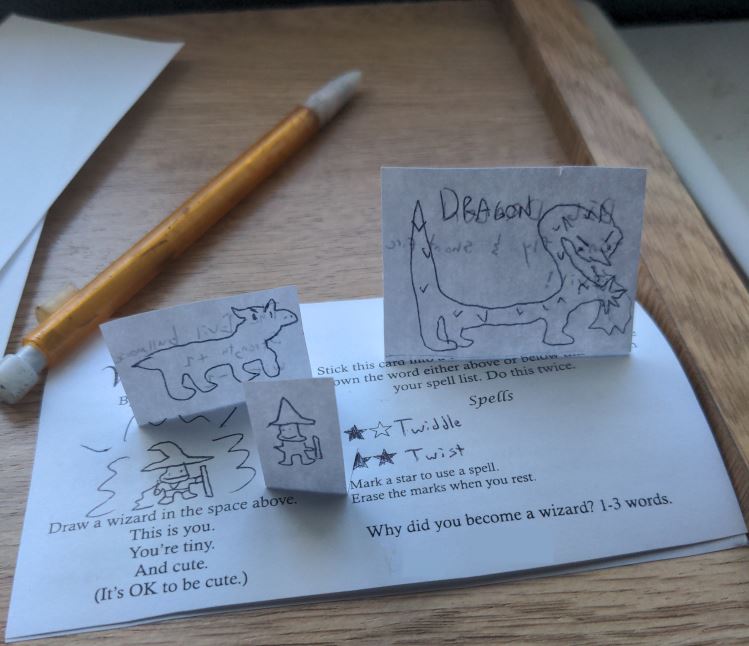 Oops! I'm a year late, but I'm so glad you liked it! Thanks for telling me! 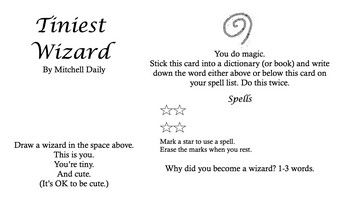 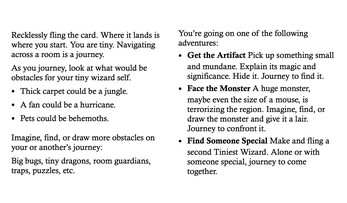 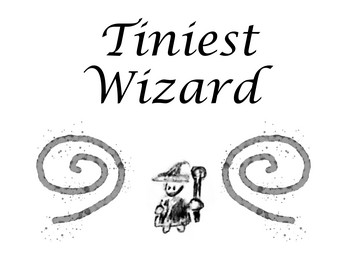